Smoking a brisket can be quite challenging for beginners and even pros. This is an interesting question that most BBQ lovers are not even bothered about sometimes. They do all they do to cook the brisket without worrying whether they put the brisket fat side up or down. Brisket is a tough cut of meat. It will stress you a little as you try to tame it. Once you get it right, you will enjoy its delicious taste.

Brisket fat side up or down: Whipping up the perfect brisket.

If you are a meat or BBQ pro, you must have gone to the butcher to get your different meat cuts. Each cut can be cooked differently. The key to a great smoked brisket is combining the rub recipe with the perfect smoking technique. This guide features the rub recipe and smoking technique, whether you put the brisket fat side up or down. Keep reading to learn more!

Fat side up or down: Master the ingredients 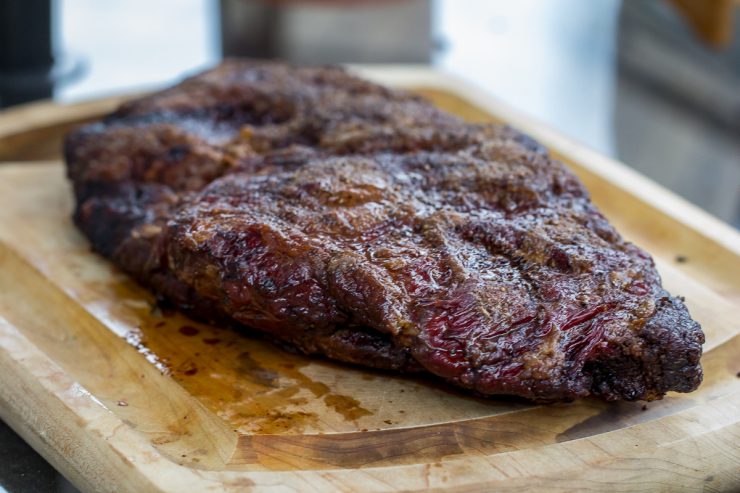 Before deciding to cook the brisket fat side up or down, you need to master some elements to give you the desired flavor. Choose the quantity according to how large or small your brisket is.

The dry mop ingredients are as follows:

Brisket fat up or down: The Basics

Before smoking a brisket fat side up or down, you need to understand some basic things involved.

Brisket fat side up: What is it about brisket?

If you have not smoked before but plan to do so, you should know that the brisket has two sides.

Do you cook brisket fat side up or down: Assumptions and the facts

Some BBQ pros say cooking the fat side up is the best choice. They believe that the melting fat bastes the meat by keeping the meat moist. Others say that the fat side will braise the chicken and mix it inside the meat.

When the fat side melts and turns into a liquid, it drips into the pan or smoker, taking away with it any spices you added earlier. It will prevent the meat from drying the side it’s on, whether up or down, but not the entire brisket.

If you want to know whether this is true or not, grill a steak to your taste. Then, slap on a slab of butter, and see how much is absorbed. You will notice that it just melts and runs off the side.

The fat side breaks down the meat as it cooks, making it tender and juicy:

This is just an assumption as it’s the collagen that breaks down, tenderizing the brisket. Collagen is the connective tissue that holds the muscle fibers together. It takes long slow cooking to break down the collagen.

That’s why BBQ pros cook brisket at a relatively low-temperature heat source of 225 degrees Fahrenheit for some hours instead of cooking at higher temperatures for less time. The long slow cooking gives the collagen plenty of time to break down and tenderize the brisket.

Smoking brisket fat side up or down: A little about braising

Braising is a cooking technique where the meat is first seared then slowly simmered in a flavored liquid in a covered pot. While you smoke the brisket, it rests on a grill grate without a pan, nor braising at this point. You don’t braise with fat; you fry with fat. People that say the fat braises the brisket are wrong.

Since this debate of whether to cook brisket fat side up or down has been going on for a long. We’ve decided to take a look at that. You can probably decide on which technique to use.

Should you cook the brisket fat side up?

Most people prefer to cook brisket fat side up since they think that the fat acts as a shield by protecting the meat. Fat side up is preferable, especially if you use a horizontal offset smoker as the heat source is mostly from the top.

Check your brisket periodically to prevent the unprotected bottom from drying out. However, if your brisket starts to get dry, wrap it with paper or foil so you can finish your cooking.

Malcolm Reed has an easy smoked brisket recipe. This professional pitmaster prefers to cook brisket fat side up. He wraps his brisket in foil about four hours into cooking, thereby preventing drying as the heat comes from the smoker. He uses a horizontal offset smoker for his recipe.

Aaron Franklin also uses the fat side up with an offset smoker. The fat layer still faces the heat.

What about cooking it fat side down?

Most people also prefer cooking their brisket fat side down to protect the meat from burning when the heat source is high.

Another reason for preferring the fat side down is that the fat side doesn’t absorb smoke and lean meat. Some BBQ pros use a spray bottle of water or juice to sprinkle over the meat. They think that it helps retain moisture for a longer time, but most importantly, let the moisture mix and create a better bark.

The fat cap should be placed down to allow easy spritzing of the meat side on top. Others feel that whether they spritz the meat or not, they will still get a better back formation with the meat side down.

Another reason to cook fat side down is that the fat does not stick to the grate as the meat sometimes does. It is not suitable for the meat to stick, as it can ruin your presentation at serving time.

Malcolm Reed said he likes cooking his brisket fat side down. He then trims off all the fat and injects the brisket with liquid to get it moist.

Meathead Goldwyn cooks his brisket fat side down. His reason is that the fat drips down into the fire, and the resulting smoke flavors the meat. The cooking fat cap is saved and put on the grate over the fire and drips away.

Cook brisket fat side up or down: Brisket flipping

Most cooks prefer to start smoking with the fat side down before flipping it during the last part of the cooking. They feel it allows spices to get into the meat and also creates a smooth bark.

Flipping and rotating the brisket is a good thing, especially if your smoker has hot spots or a non-uniform temperature gradient either from side to side or top to bottom. If one part of your smoker is more heated than another, the meat cooks fast and dries out faster. The meat can be overcooked before the chicken in the cooler zone is done. This could happen with some offset smokers where the side facing the firebox is often hotter.

You should know why flipping over the meat while cooking is a good idea. This is because it will even out the exposure to the higher heat and promote a more even cook. It also allows one side of the meat to rest and reabsorb the moisture while not close to the heat, especially when using a horizontal smoker.

Smoke brisket fat side up or down – Correcting common problems.

Some problems usually occur when cooking briskets. It could result from the type of smoker you’re using.

Fat brisket – Does it matter where the heat comes from?

Which side of brisket goes up – Understand your smoker.

The cooker’s design and functioning determine whether the brisket should be cooked fat side up or down. You need to understand your cooker’s operation before you start smoking.

The insulation provided by the fat against direct heat helps the brisket not to dry out. The brisket’s lean side can still become dry even if it is away from the heat source. To prevent that from happening, wrap it with aluminum foil to maintain its moisture. Avoid the mistake of allowing the lean side to face the direct heat because it will become scorched.

Do you cook brisket with fat side up or down: Best practices in the industry

Fat cap up or down – Tools you can use

Smoking brisket fat up or down – FAQs

What side of the brisket goes up?

Flip and rotate your brisket at any time. If you want the fat to shield the meat from the fire, it is better to leave it fat side down for some time. The side of the brisket that goes up depends on your choice.

How do you cook a brisket fat side up?

The first thing is for you to get your meat. You can decide whether to smoke a whole brisket or not. Start by preparing your brisket by trimming the fat cap to ¼ inch or less. Rub it with your favorite seasoning paste or dry spice rub. You can also decide to use only salt and pepper. After doing all these, rest the meat overnight in your refrigerator to helps the flavors penetrate, or you can season it and cook right away.

Set your smoker for gentle, indirect heat. On a gas grill, light only one of the burners. Add a few pieces of your desired wood for smoke, and place your brisket away from the heat. Set your temperature to 225 degrees Fahrenheit or less. Smoke the brisket for up to 14 hours, depending on the size, until it is moist and tender when using a fork.

Do you cook a tri-tip fat side up?

You can start with the fat side up if you want. If you put the thick area of the tri-tip on the fire first, the moisture will come up through the meat and make it tender.

Should you flip a brisket?

Flipping a brisket helps even out the exposure of the meat to heat. Airflow inside any smoker is uneven, and allowing the brisket to sit in one place for long can cause part of it to dry out. It is good to flip and rotate your brisket at least once while cooking.

When should I wrap my brisket in foil?

It is recommended that you wrap your brisket when your meat hits 150 degrees Fahrenheit internally. This will build a beautiful bark on the outside of the flesh and offer a beautiful red smoke ring.

Cook brisket fat side up or down in oven – Wrapping up.

If you have cooked briskets before, you will know that the part closer to the heat gets dryer. Everyone cooks their briskets according to how it suits them.

It is good to know your smoker, identify where the heat is coming from, and place the fat cap between the heat and meat. It is better to flip your briskets once in a while when cooking.

We hope you’ve found this review useful. If you enjoyed it, then you can also share it and clear up some doubts.